Fall Out Boy - Evening Out with Your Girlfriend (2003) 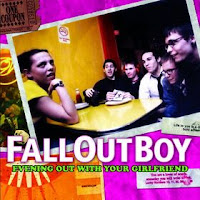 Before Fall Out Boy became mopey, dopey purveyors of emo whining suitable for listening to while wearing your librarian sweater and giant, black-framed glasses, Fall Out Boy were apparently a bunch of misguided dorks leering at an ugly girl while surrounded by eye-searing colors. Well, actually they're still a bunch of misguided dorks, but at least their embrace of the mopier side of life has improved their design skills a tad.
Posted by T.S. at 4:09 PM

you are retarded.
the end