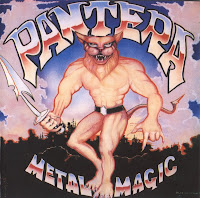 Probably the king of lousy metal album covers. Most metal album art is pretty ridiculous to begin with, but this literally looks like it came straight out of some 14 year old metalhead's sketchbook, where it was drawn alongside painstaking recreations of the Van Halen and Metallica logos and a few drawings of flaming skulls and chains. The belt and completely implausible knife-sword combo thing just seal the deal.
Posted by T.S. at 3:01 PM No comments: Links to this post 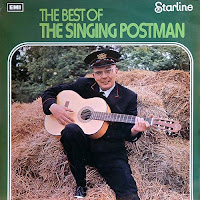 "Today, boys and girls, I'm going to sing to you about the wonders of British dentistry. Gad, I wish that the record company hadn't abandoned me on this pile of rotting hay. It's a bit hard on my bum and I think it'll mess up my nice new uniform. Plus I've got a package to deliver to Mrs. Evans or I'll catch hell. Oh well, might as well just keep singing."
Posted by T.S. at 2:58 PM No comments: Links to this post

The Handless Organist - Truly a Miracle of God 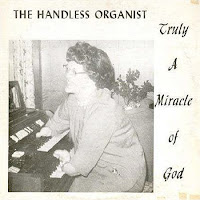 Albums like this used to be fairly common in the Christian music community. The idea, I suppose, was that having obviously crippled or deformed people record Christian tunes was meant to be inspirational in some sort of matronly, cluckingly condescending way. "Oh yes, those poor people must have things so hard. It's truly amazing that they can make such music. Truly, Jesus has blessed them, doncha know."

Social critique out of the way, it actually isinteresting that a woman with no hands (or at least deformed stubby things that should be hands) could learn how to play the organ. However, it would've been better if the album cover didn't look like it had been made in five minutes in somebody's basement.
Posted by T.S. at 2:52 PM No comments: Links to this post 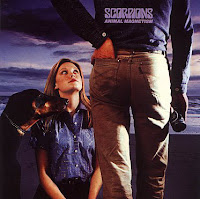 From a design standpoint, this album cover is actually really competent and well-shot. From most ther standpoints, it's just awful. Ha ha get it the woman is attracted to the man just like the dog is because he has so much animal magnetism! Because women are just dumb animals who are only good for making babies and can't drive! Plus they're bad at math I mean what the hell!!!

Fun fact: the original title for this album was "Dumb Bitches," but their record company decided they should tone it down a bit.
Posted by T.S. at 2:47 PM No comments: Links to this post 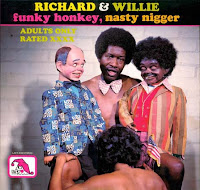 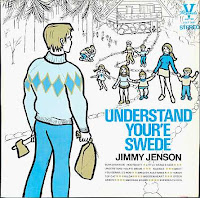 Jesus Christ, how many kids does this guy have? It almost looks like he's just standing there, dumbfounded, while his wife is telling him "Looks like the fertility meds worked! I squeezed out a few more while you were out today. Hope this isn't an inconvenience!" Meanwhile, the guy's holding a bag full of dead squirrels since that's all he managed to kill with his hatchet while out in the woods that day and he realizes that there's far too many children to feed now. Then the mental picture I have starts to go into slasher-flick territory, so maybe we'll see a sequel entitled "Understand Your'e Swede 2: Die, Swedes, Die!"

This album cover also teaches us that Engrish isn't just a Japanese phenomenon.
Posted by T.S. at 11:37 AM 1 comment: Links to this post 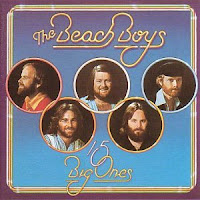 And now it's time for the washed-up pop star olympics! See Brian and Dennis Wilson compete for the gold in the Drug-Induced Self-Destruction event! Watch as Mike Love recieves the Lifetime Achievement Medal for being a total asshole! Plus, during the break, we'll hear helpful tips for hiding in your own facial hair from Al Jardine and Carl Wilson!
Posted by T.S. at 11:21 AM No comments: Links to this post 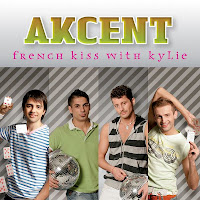 First, I have to question the likelihood of any of these guys French kissing with a girl named Kylie. They look like they'd be more likely to hang out with Herbie Mann in his bath house of love than be seen anywhere around a girl.

Second, why the hell the two guys in the middle are just carrying around disco balls? It's not like you can just bust out a disco ball and start up a dance party at any time. Then again, maybe these guys are visionaries and trying to start a new trend.

Third, to the guy on the far right: nobody really wants to smell your armpit, so knock it off. And your bright orange belt sucks.
Posted by T.S. at 11:15 AM No comments: Links to this post 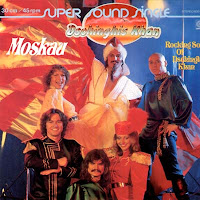 Dschinghis Khan are nothing if not a democratic little group. They have something for everybody! There's the dashing, bat-winged sultan, the black-garbage-bag-and-rope wearing pirate, the charming red flight attendant, the head on a green end-table, the extra from a third-rate sci-fi movie, and the canary lady! Together, they form a band whose one goal in life is to sing about Moscow and nothing but! Who said Germany didn't favor multiculturalism?
Posted by T.S. at 11:11 AM No comments: Links to this post 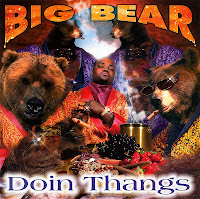 Occasionally, album covers are so terrible or so ridiculous that they almost become awesome again. This is a perfect example. The entire scene is so ridiculous that it's hard not to like it on some level. The bears, all blinged out and drinking out of impossibly huge pimp cups. Big Bear himself in the middle of the cave, sharing his bounty of nuts, berries, and blunts. The constant use of lens flares. The fact that words "Big Bear" are made out of slowly-dripping honey. If nothing else, you really have to admire Big Bear for sticking so doggedly to a theme. Of course then you start imagining these bears in the 'hood, getting into a turf war with a gang of pumas, and then the Yogi Bear theme starts up in my head and the whole concept starts falling apart.
Posted by T.S. at 11:04 AM No comments: Links to this post 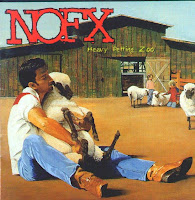 Of course, if you think this one's bad, you should see the album's lesser-known alternate cover, titled Eating Lamb. 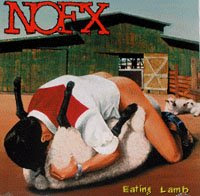 Eating-based sexual puns have already become really old. Adding a sheep as the subject of one of theses puns does not make the pun any fresher, and instead makes me wonder what the hell is wrong with you.
Posted by T.S. at 10:55 AM No comments: Links to this post

Labels: animals, bad taste, not work safe, what the fuck 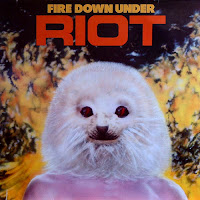 When your stock in trade is hard-hitting, devestating heavy metal, one of the key stylistic components is coming up with the most terrifying, awe-inspiring fictional beast for your album cover is a must. And believe me, nothing strikes fear into the hearts of men more than a beast that's half-man, half-cute, cuddly baby seal.
Posted by T.S. at 10:51 AM No comments: Links to this post

Ken - By Request Only 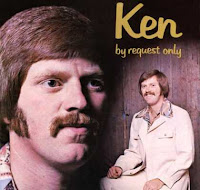 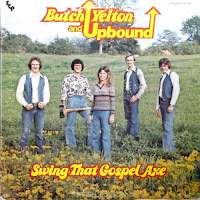 Despite the seemingly wholesome album title, I can't help but think that there's something ominous about this cover. Look at the man holding the axe; doesn't he seem to be a bit too close to our innocent female friend? Are we witnessing a scene just before he splits her head open like a rotten log, sacrificing her so that our sins may be washed away by the defiled blood of non-believers such as her? Will the vested men try to stop him, or will they cheer him on, their unnatural grins looming eerily as the axe-wielding madman shouts out snatches of gospel tunes while seperating her limbs from her lifeless body, causing her blood to stain the untainted grass of the pasture? We may never know.
Posted by T.S. at 3:37 AM 1 comment: Links to this post 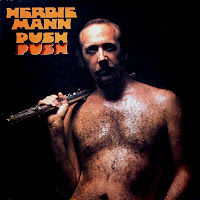 The combination of a phallic flute with a naked, oiled up, exceptionally hairy man just leaves me speechless. He seems to be beckoning to me, like the Pied Piper if he frequented Turkish bath houses, beckoning me to come with him into his 70s love den so we can push, push.

Of course, he could've concievably been doing this to attract women, but last I checked most women don't go for the "I worked up a sweat then rolled my upper body around in barber shop clippings" look.
Posted by T.S. at 3:31 AM 2 comments: Links to this post

Labels: what the fuck

Of Montreal - If He Is Protecting Our Nation Then Who Will Protect Big Oil, Our Children? (2003) 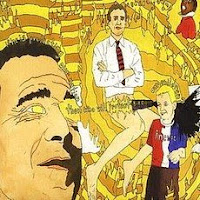 Of Montreal frontman Kevin Barnes is having trouble coming up with a cover for his latest EP. He has tossed and turned countless sleepless nights trying desperately to think of an image that would best convey his band's blend of neo-60s psychedelia. Suddenly, a breakthrough! He calls the rest of the band. "Guys, I've finally figured out what our next release's cover should be!"

"I see... an image of George W. Bush, looking blank and zombified, ejaculating oil into the ear of a small child."

And thus, history is made.
Posted by T.S. at 3:23 AM No comments: Links to this post

Labels: bad taste, what the fuck 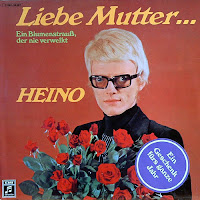 While loving one's mother is a sweet thing to do and all, it doesn't help me figure out just what the hell Heino's gender is supposed to be. I look into his/her's gigantic glasses and stare into those blue, bugged eyes and no answer comes to me. The fuller lips SUGGEST that Heino is female, but their overall facial structure seems to suggest otherwise. The cute roses obscure Heino's upper body, making it difficult to ascertain secondary sexual characteristics. When I look at an album cover, I don't really want it to turn into a game of "guess the gender of the creepy Teutonic 'It's Pat,'" especially not when anyone's mother is involved.
Posted by T.S. at 3:15 AM 2 comments: Links to this post 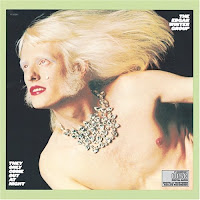 If a partially-nude Edgar Winter is what comes out at night, I think I'll never be able to sleep again.

I'm not sure what's worst about this album cover: Edgar's eyeliner and lipstick combo (perhaps subtly hinting at WHY he comes out at night), his gigantic white mole that more closely resembles an unpopped zit, or his huge diamond necklace which adds even more to his bizarre nudist albino streetwalker look.

I'll just go with saying his mutton chops are beyond freaky and call it a day.
Posted by T.S. at 3:08 AM No comments: Links to this post 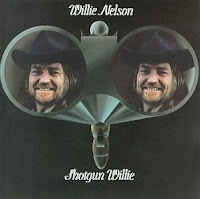 I love Willie Nelson and all, but let's face it, he's not exactly an attractive man. Slapping two identical, non-flattering photos of him on an album cover doesn't exactly help matters. Placing them inside a poorly-drawn shotgun just makes you wonder about Willie's mental health. Maybe this album cover was his thinly veiled way of saying "kill me for even thinking this might have been a good idea."
Posted by T.S. at 2:58 AM No comments: Links to this post