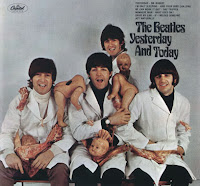 Let's ignore the whole "GREATEST BAND EVER" critical fawning that takes place whenever the Beatles are mentioned for a second and be reasonable here; this cover is fucking awful.

I can't really imagine how an idea this asinine was concocted in the first place. "Let's drape meat and plastic body parts on the Beatles!" sounds like a bad joke, not an actual art project. Even then, using one of said images for an album cover is not only asinine but a huge lapse in judgement. Everyone's favorite mop-topped whatevers covered in meat is not something your average pop fan wants to consider.

Some people consider this album cover to be a brilliant ploy by the Beatles to stick it to the man and make some sort of bold artistic statement. An artistic statement involving meat, I guess. I agree more with George Harrison's take on this whole thing; "I thought it was gross, and I also thought it was stupid. Sometimes we all did stupid things thinking it was cool and hip when it was naïve and dumb; and that was one of them."
Posted by T.S. at 5:02 PM

You're a wimp, whatever you do PLEASE don't look up the cover for Disgorge - Forensick, a Mexican death metal band, its the modern equivalent of this cover, on a second thought, look it up, I dare you.

Google the "butcher cover" and you will find out the whole dumb story behind this cover.

It wasn't even supposed to be an LP cover to start with, it was just part of a series of photos that was an "art" project under the name "a somnambulant adventure." Some of the other shots from the session were used in other trade ads and things around the same time. A lot of people state that "this was the Beatles statement against Capitol Records (in the USA) "butchering" their albums, but that is wrong. Other people, including even somebody named Paul McCartney, even stated that this was their statement about the Vietnam War. I don't even believe that. I think it was (like George H. said) a goofy "hip" art statement that went to far and didn't really succeed in doing what it was trying to do. In other words: Massive Fail.
But the recalling of the cover made the most expensive collectible record in history. Word.