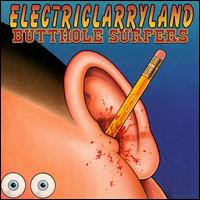 I can't really nail this album cover for being in bad taste since a solid majority of the Butthole Surfers's album covers were in bad taste. I can at least take them to dask for doing bad taste so ineptly. I mean, this is a band that went from album covers featuring photos of starving Africans and John Wayne Gacy paintings to a very crudely drawn cartoon image of a guy getting a pencil shoved into his ear. This doesn't make the previously mentioned covers that much better, mind, it just makes you realize that if you're going to really go for bad taste, you might as well go all the way. It won't make your album cover any better, but it won't look so half-assed.
Posted by T.S. at 4:45 PM