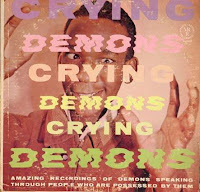 Yet another in a long line of things where you have to wonder why anybody would put it on LP in the first place. Maybe this is the primitive equivalent to the Faces of Death video series since I can see it appealing to a similar audience. Or maybe it's to make Christians feel really, really good about themselves that they don't have to resort to semi-bogus faith healing as provided by the healer of broken hearts

At any rate, if you're going to market this as being super scary demon voices speaking through people, you could do an awful lot better than just a black man making a really silly face. When I think "being possessed by demons" I don't think "causes you to make faces that Bill Cosby wouldn't make at his worst." I suppose there could be an old-timey "black devil" racist subtext to this but even if that's what they were aiming for they could've at least dressed him more menacingly.

There's at least one positive thing about this; while this album cover makes demons look terribly silly, at least it doesn't make them look as ridiculous as they do on any given heavy metal album cover.
Posted by T.S. at 7:59 PM