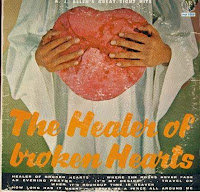 When talking about broken hearts, the last thing in the world I expect is literalism. That goes double for the almost anti-literal Christian music scene. So my first though is that this is a parody of some sort, but none of the song titles seem like what you'd find on a parody record. My other thought is that this is just a bit of dark humor on the behalf of A.A. Allen but then I remember that the Christian music scene thinks that releasing album covers featuring people like the Handless Organist and Jeff is actually a good idea.

If nothing else, that's possibly the weakest blood stain in the history of blood stains. Unless we're to learn that not only is his heart broken, he's also anemic, which seems sadly plausible.
Posted by T.S. at 9:01 PM

Labels: christian, gory, what the fuck