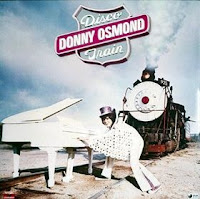 It's best to understand disco not as a form of perfectly good dance music, but rather a horrible mental disorder that infected the mid-to-late 70s and destroyed American culture from the inside-out. Under the influence of disco, people did strange and horrible things. Here, we see young, clean-cut all-American Donny Osmond, whose mental state has clearly been disturbed by disco. Having stolen some clothes from Elton John's wardrobe, he's placed himself in the way of a speeding train, completely oblivious to the danger he's in as he pounds away on a white grand piano he snagged from Liberace. He doesn't know what the piano has to do with disco music: he doesn't especially care. All he knows is that he must boogie down before the train sets upon him and cuts his life short.
Posted by T.S. at 4:56 PM