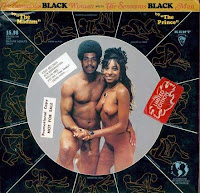 I realize this is meant to be a sort of parody of sex albums from around this time period (yes, such a thing did exist), and the photo itself isn't really that bad, all things considered. It's like a more attractive, less horrifying version of John Lennon and Yoko Ono's Two Virgins. The problem is that, since this is a Rudy Ray Moore album on top of being a parody, you have to have Rudy's face on the cover somewhere. How to accomplish this? Crudely pasting his face in over the head of whomever his stand-in is supposed to be. Come on, you might as well go all the way with it! At least you can ogle the crude neon-line drawings along the margins to make up for that. Okay, not really.
Posted by T.S. at 8:29 PM