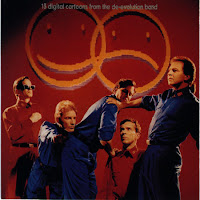 At a first glance, the cover is already pretty cheesy. Devo had started giving in to that impulse somewhere around Oh No, It's Devo!, so that was probably to be expected. Then you look at David Kendrick's chin (second from the left) and you realize that it's very obviously glued on. Crookedly. Apparently, his chin ended up getting out of the shot accidentally and they decided to fix it in a really half-assed way. That's OK, though, since I don't think anybody in Devo really cared at this point. De-evolution indeed.
Posted by T.S. at 9:44 PM