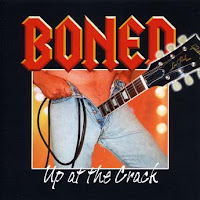 By the looks of the font and the horrible double-entendre apparent in the album's title, I get the impression that the guys of Boned decided to form a band after listening to AC/DC's "Big Balls" on repeat for a few hours straight, laughing their asses off every single time at every single joke. Then they decided to do their idols one BETTER by having their album cover itself be a joke! (See, because the guitar's neck looks like something else!!!) Remember, if a dumb joke told by someone else is funny once, then it has to be funny if you repeat it over and over and over again!
Posted by T.S. at 10:47 PM