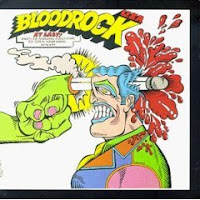 For the longest time, I assumed that this album cover was depicting a green orc creature standing just off-camera and simply driving his finger through the skull of Perfectly Two-Dimensional Man, which didn't make a lot of sense to me. Then I realized that the orc's fist is acting as a GUN and he's actually firing a bullet through our flat hero's poor cranial cavity. Does this make me feel stupid, being bested by an album cover? Not really, because it's drawn so shittily that they couldn't even convey what they were trying to get across correctly. If anything, it doesn't answer WHY we should care that the guy is getting his brains blown out in the first place. Maybe it's because of his hideous fashion sense, but I get the sinking feeling that's not it.
Posted by T.S. at 12:30 AM