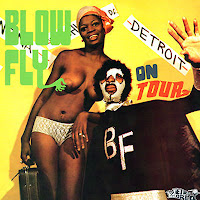 If Blowfly's ridiculous little lucha libre outfit weren't enough to throw this album cover firmly into the realm of the ridiculous, having part of the album's title tweak that black girl's nipple definitely takes the cake.

Going by the cover alone, I'm not sure if I should expect something sexy with this album's music or something that sounds like mexican wrestling. Maybe it's sexy mexican wrestling. As interpreted entirely by black people. It can't be any worse than hearing Ken take requests.
Posted by T.S. at 4:01 PM