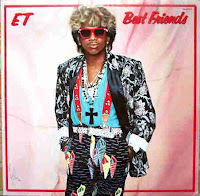 I'm reasonably sure that if E.T. had looked like this instead of as a wrinkly burlap sack filled with beer and Reese's Pieces, that movie probably would've lasted all of 5 minutes, with E.T. not only not going home, but being thrown in jail after Eliot made a quick phonecall home to have mom get the cops. Then we never would've had one of the 80s' most inexplicably popular and successful movies, along wiht no E.T. videogame for the Atari 2600.

I'm only talking about the movie E.T. because Eddie Towns's outfit is so ridiculous that it completely defies rational explanation. It's like a homeless bum got drunk on Thunderbird and raided Bootsy Collins' wardrobe after consulting with Tina Turner's wigmaker.
Posted by T.S. at 11:17 PM

You sir, are an ignorant doosh.

lol, and your blog sucks.

So go funk yourself before you post your stupid "musings" about a subculture you know nothing about.