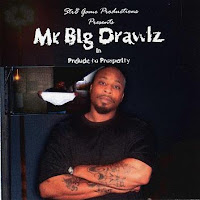 It could've been a decently low-key album cover: our rapper, Mr. Big Drawlz, with a suitably thuggish portrait, standing out in the streets. Not necessarily a great album cover, but a fitting one. Then comes the big question: why the stretched-out photo inserted into the background? Specifically, why the stretched-out photo of Mr. Big Drawlz holding a gigantic pair of briefs? Is this meant to be an explanation for his unusual moniker? A sign that he wears them? None of this makes any sense.

About the album's title: I don't forsee any prosperity coming your way, Drawlz. If someone's going to buy a rap album, they're going to buy one that doesn't have a gigantic pair of men's underwear on the front.
Posted by T.S. at 8:51 PM