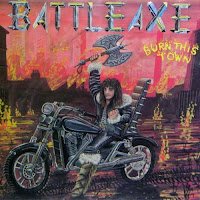 "Dude, so I like totally have this awesome story to tell you! So, like, I drew this bitchin' picture when I was hanging out in shop class today! It was so cool! It had, like, burning buildings and some guy wearing leather holdin' up a huge axe--I know, dude, it was fuckin' sweet! Oh yeah, and he was ridin' this huge motorcycle, it had like spikes and shit, it was cool. I liked it so much that when I was walking to the corner store to bum some cigarettes off the guy that owns it, I decided to show the picture off and these guys just walk right up to me and want it. They said they were in this heavy metal band--I'm not shitting you, it really happened, man!--and they were going to pay me a lot of money, and I was like whoa, that's totally sweet! Too bad I can't show you my drawing now, but the album should be coming out soon, man, that's what those guys told me. They even made me put their name and stuff on the album, they're called Battleaxe, so yeah, it totally rules. I bet I can pick up chicks by saying I'm part of a cool rock band now."
Posted by T.S. at 11:00 PM