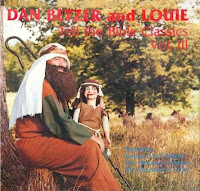 Let's ignore the cheap costumes and Dan's beehive-like fake beard for a second. Something bothers me about this whole thing on a fairly deep level. I mean, ventriloquist acts generally work as a visual spectacle. Without seeing the puppeteer actually manipulating the puppet, most of the appeal of seeing a ventriloquist act goes out the window. Who really wants to listen to a ventriloquist act on record? Who wants to do so badly enough that it creates a demand for a series that's actually hit its third volume? And what in the hell does a ventriloquist dummy add to bible stories anyway?
Posted by T.S. at 3:57 PM