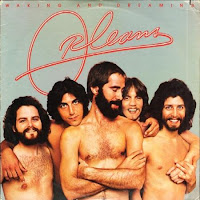 This has to be one of the most homoerotic album covers of all time. The fact that it's homoerotic isn't necessarily bad, granted, it's just how awful everybody looks. The horrible 70s hairdos and facial hair haven't aged well at all, and there's those dopey fucking grins. If you're attempting to be sexy, try to not grin like an idiot.

So we have a bunch of dorks trying to be sexy and instead looking highly gay for each other. What's there left to discuss? Oh yeah, some of the band members were brothers. Try wrapping your head around that one.
Posted by T.S. at 5:11 PM