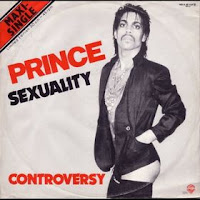 While Prince has become somewhat infamous for appearing semi- or mostly-nude on a good number of his album covers, the Great Purple One usually managed to pull it off with enough style and seething sexuality that it actually managed to work on some level.

However, this particular cover came from earlier in Prince's career, when he was trying to work out the bugs in his persona. Instead of looking sleek and sexy, here he just looks like Freddie Mercury with a bad haircut. Actually, that's kind of an insult to Freddie Mercury. More like some skeezy sex offender who delights in exposing himself in front of the 6 year olds at the playground.
Posted by T.S. at 3:06 PM