Johnette Downing - From the Gumbo Pot: Stirring Up Tasty Tunes (1998) 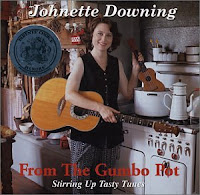 Boy does this album cover not know what it's trying to convey. She's standing in a 30's-era kitchen with enough food lining the shelves to feed an army, but she's still reduced to cooking her ukelele for sustenance. She has a matronly, trailer-trashy getup on that suggests that she's nothing more than a housewife, but she has a guitar slung around her neck like she's a singing cowboy, nevermind that uke that's being turned into stew. The entire image suggests something eerie and unsettling, especially her wide-eyed stare and vacant smile, but she's been parent approved! Since this album cover seems to be trying to work in contrasts, I dub this album as being simultaneously weird and creepy.
Posted by T.S. at 11:40 PM