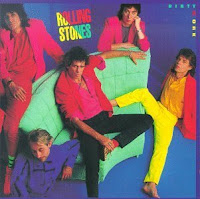 If anybody really needed to be convinced that the Rolling Stones were all washed up by the mid-80s, this cover should've been a huge wakeup call. The preponderance of pink and the bizarre dinner-mint colored chair would've been ugly even when this photo was actually taken place, but the real kicker lies in Mick Jagger's canary-colored crotch shot. Rather than being tittilating and shocking, like it would've been in the past, it instead just comes across as irritatating and mildly disgusting. "Jesus Mick, close your damn legs up. What if your kids see?" Oh how harsh it is to see rock's sex gods in decline.
Posted by T.S. at 8:44 PM