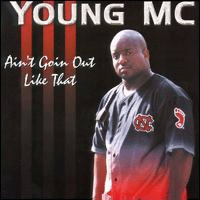 You know, if I called myself Young MC, I'd have to agree with the sentiment of the album title. I mean, I wouldn't want to go out looking chubby and middle-aged either. I also wouldn't want to go out having released an album whose cover looked like it took 5 minutes to make using one of those bargain-bin "MAKE YOUR OWN CD COVERS 100s OF FREE DESIGNS" discs that you always find sitting next to the CDs that claim they have thousands of free fonts on them and the ones that have 8 billion different ways to play poker.

Having said all this, I can conclude, despite his importance as a rapper back in the 80s, that Young MC is one of the biggest failures of all time.
Posted by T.S. at 11:45 PM